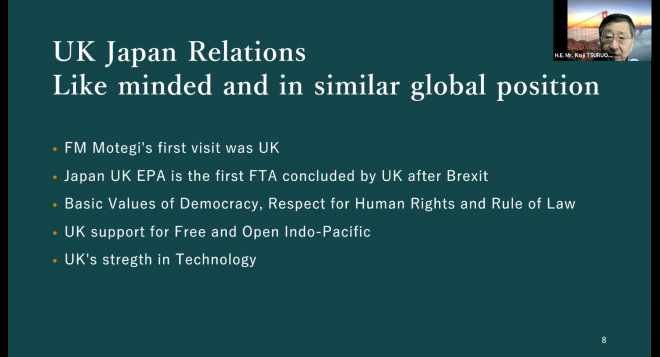 UK selected to leave EU by the referendum which was decided by a slim margin. UK politics were in turmoil producing three Prime Ministers in three years.

UK finally achieved Brexit in 2020 and the lecture will introduce the British discussions during this period.

Now that UK can conduct diplomacy on her own UK is showing active engagement with the world announcing Global Britain and concluding FTAs.

UK is a democratic nation that honors Rule of Law. Possibility of enhancing Japan UK collaboration is rising. UK participation to Indo Pacific and CPTPP will be discussed. 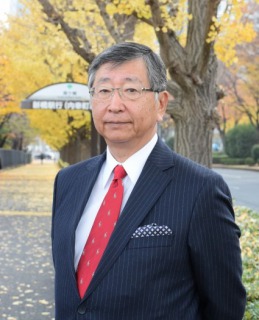 H.E. Mr. Koji Tsuruoka was appointed as the Ambassador of Japan to the United Kingdom in April 2016. Prior to this appointment, he was the Chief Negotiator for the Trans-Pacific Partnership (TPP) (2013-2016). He has served in embassies in Moscow, Washington and Jakarta. In the Ministry of Foreign Affairs he has served as the director of the legal division and North American division, Deputy Director General of the Foreign Policy Bureau (2003-2006), Director-General for Global Issues (2006-2008), Director-General, International Legal Affairs Bureau (2008-2010), Deputy Vice-Minister for Foreign Policy (2010- 2012), and Deputy Minister for Foreign Affairs (2012 –2013).