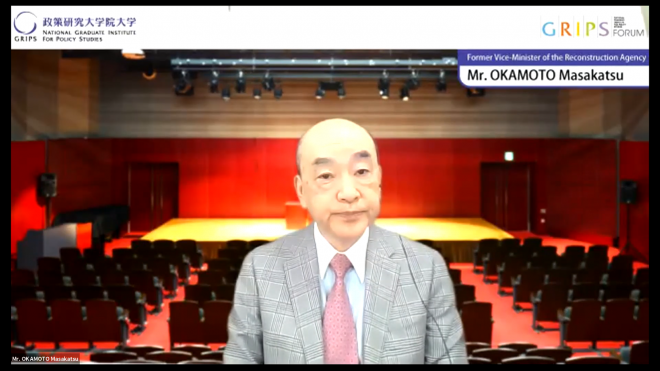 In March 2011, Japan was struck by an unprecedented great tsunami, washing away many cities on the Pacific coast of the Tohoku region. 10 years have passed since then, and Japan has succeeded in getting back on its feet.

The large-scale reconstruction has been completed. During reconstruction, not only were the cities restored, but they were also rebuilt to provide safety and comfort.

Relocation to higher ground and land raising has helped build tsunami-resilient cities. Moreover, in addition to restoring the infrastructure, support was provided to restoring industries and communities, shifting the policy from “land recovery” to “livelihood restoration.” 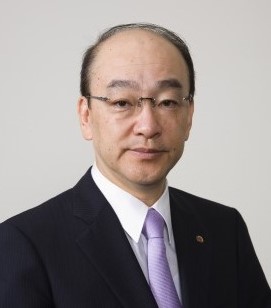 Mr. Okamoto, after graduating from the University of Tokyo, Faculty of Law, joined the Ministry of Home Affairs.

After serving as Director-General, Toyama Prefecture;

and Secretary to the Prime Minister,

he served as Deputy Director-General of the Headquarters for Supporting the Lives of Victims of the Great East Japan Earthquake in 2011.

Since 2011, Mr. Okamoto has served more than 9 years for the reconstruction from the Great East Japan Earthquake.

Positions during this period include Vice-Minister of the Reconstruction Agency and Counselor to the Cabinet, among others. He also served as a visiting professor at the University of Tokyo and a lecturer at Keio University.

He is the author of “The Great East Japan Earthquake – Reconstruction Will Change Japan: The Shape of the Future for Governments, Corporations, and NPOs” (Gyosei, 2016).

＜We ask that you do not record the forum or take photographs during the forum. Thank you for your understanding and cooperation.＞