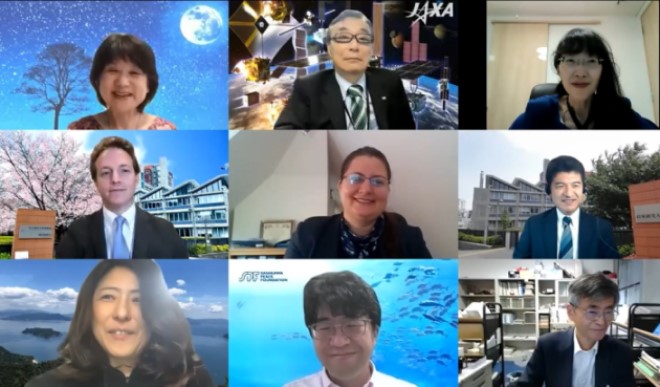 Institute of Space and Astronautical Science (ISAS), Japan Aerospace Exploration Agency (JAXA) is now putting our space assets from Mercury to Saturn, and then will accomplish to make the ISAS/JAXA’s Deep Space Fleet in space, in which a lot of spacecraft swarm to investigate the history of the solar system in 4.6 billion years and the origin of life. Akatsuki is an active Venus probe. ESA’s BepiColombo with ISAS’s Mio is going to Mercury. Hayabusa2 explored Asteroid Ryugu in 2019, and brought back the asteroid material to Earth in 2020. SLIM is under development for a lunar lander in 2022. DESTINY+ aims to flyby asteroid Phaethon. MMX aims at the sample return from Phobos of Mars. ESA and JAXA develop JUICE toward Jupiter. JAXA cooperates with NASA’s Saturn mission Dragonfly.

Dr. Hitoshi Kuninaka received his Ph.D from the University of Tokyo in 1988. He was promoted to Professor of the Japan Aerospace Exploration Agency in 2005. He held concurrently the post of Professor in the Department of Aeronautics and Astronautics, the University of Tokyo, from 2004 to 2018. He supervised HAYABUSA2 project team as a project manager from 2012 to 2015. In 2018, he became Director General of Institute of Space and Astronautical Science (ISAS) as well as Vice President of Japan Aerospace Exploration Agency (JAXA).