GRIPS Forum “ASEAN IN THE INDO-PACIFIC”

ASEAN was established in 1967 with the purpose of managing and ensuring peace and stability in the Southeast Asia region. Through dialogues and cooperation in various areas ASEAN has succeeded in building trusts and confidence among its member states.

However, ASEAN is also cognizance that peace, stability and prosperity of its members relies not only on the relationship among themselves but also influenced by the situation in the wider region surrounding Southeast Asia as well as the geostrategic interests of other major powers. It is within this vein that ASEAN deliberated on an ASEAN Indo-Pacific outlook which was adopted by ASEAN at its Summit in Bangkok in 2019.

The formulation of an Indo-Pacific concept or strategy, focusing on the Indian and Pacific Oceans is of paramount strategic importance for ASEAN for many reasons and the main thrust of an Indopacific strategy from ASEAN perspective is the strengthening of existing regional cooperation mechanisms in the Indopacific region, based on existing ASEAN led mechanisms. 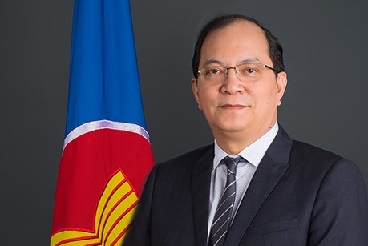 Deputy Secretary-General (DSG) of ASEAN for ASEAN Political Security Community since February 2021.
Prior to assuming his current position, DSG Tene was the DSG for Community and Corporate Affairs from 2019 to 2021. He previously served various roles at Indonesia’s Ministry of Foreign Affairs. In his new post, he will support the Secretary-General (SG) of ASEAN in implementing the ASEAN Political Security Community Blueprint and strengthening relations with ASEAN Dialogue Partners and international community. DSG Tene holds an MA in Public Administration from the National Graduate Institute for Policy Studies in Tokyo, Japan and a BA in Economics from University of Indonesia.