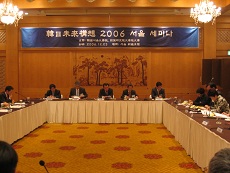 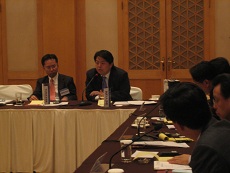 The second Japan-Korea Future Initiative seminar was held in Seoul, Korea during December 22-23, 2006.

At this seminar, exchange of opinion was made on the following issues: “Perceiving the political landscape in east-north Asia and the challenges of Korea-Japan cooperation”, “Internal situation in Korea and Japan and their future cooperation: possibilities and challenges” and “common tasks faced by Korean and Japanese political leaders”.
Following on from the first seminar, Professor Han Seung-soo (former Minister of Foreign Affairs of Korea) participated in the seminar to act as the facilitator for the first session.