Although Asia remains the world’s fastest growing region, there are signs of a growth slowdown. The Euro area, Japan and the US have showed positive economic growth, but the recovery remains sluggish.  Furthermore, there is uncertainty regarding the direction of quantitative easing in advanced economies and the impact of the monetary policy may have on other countries. Rising protectionism and anti-globalization movement may endanger the established global trading system. Meanwhile, Asian developing economies face the challenges of developing their infrastructure and further integrating their economies with the rest of the world while maintaining fiscal and financial stability. JIMS will invite leading scholars and practitioners to share their insights on how to cope with the challenges and achieve sustainable growth under globalization. In particular, JIMS will focus on three critical issues: (1) Managing Financial Stability and Capital Flows (2) Fiscal Management and Debt Sustainability (3) Structural Reforms and Growth Policies in Asia.

To contain the shock of the global financial crisis, major central banks implemented unconventional monetary policy—quantitative easing (QE). Recently, the European Central Bank and the Bank of Japan introduced negative interests. On the other hand, the US Federal Reserve started the process of exiting QE. The volatilities of global financial markets and exchange rates have risen significantly.  This session will look into the challenges associated with the lack of synchronicity of monetary policies and discuss the likely impacts of QE, including the spillover effects to emerging Asia, the precautions that need to be taken in the implementation of such policies and the possibility for continuing to utilize them in the future.

The rapid aging of the population is a common trend in East Asia. The speed of the aging process is particularly high in Japan and it puts a stronger pressure on social security system, in particular on public pension and health care systems. However, increasing tax and social security contributions would have negative impacts on economic growth. Increasing labor supply of elderly and women as well as utilizing the private initiatives for providing health and nursing care services through the markets are key measures for reducing the fiscal burden and keeping the economy on a steady growth path. A few sessions will discuss issues of fiscal management and debt sustainability.

Some Asian countries, such as Singapore, Korea, Taipei, China and Hong Kong SAR, succeeded in maintaining rapid income growth until they turned into high-income economies. Although Asia remains one of the world’s fastest growing regions, there are signs of a growth slowdown in several Asian middle income countries and concern that this might delay their catch-up process to high income countries. Many factors can play a role in the development process such as the quality of institutions, the legal framework, the human capital, the structure and intensity of international trade, infrastructure and demographic factors. This session will look into the causes of the recent slowdown in Asia and the structural reforms that must be addressed in order to achieve faster growth and reduce poverty. 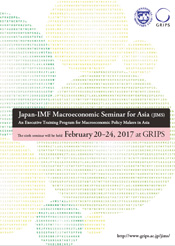